Thank you to everyone who came out today and made Urban Dare Orlando a big success. We will definitely be back next year.

Lauren Walker & Tico Sejas of Infinite Possibilities were the first team to complete their final dare at the finish, but that was not quite enough to win. Rino Cacchione and Ashleigh David of Moop finished a couple minutes later. They also got a picture of 6 non-contestants forming a human pyramid. This gave them a five minute bonus making them the Urban Dare Orlando Champions. Congratulations on a well-run race.

There was no big stumper clue in today's race. Several people said their toughest one was finding Orlando's Statue of Liberty. Most of these racers that had problems with this also said that they drive by it almost every day. My brother Dirk, who lives about a quarter mile away, had to ask me where it was. Go figure. 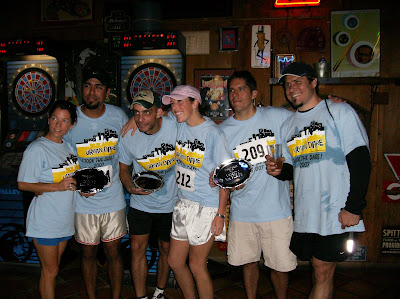 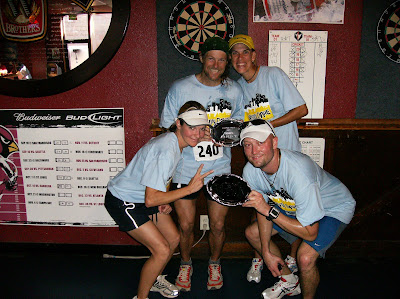 Congratulations to Windy and David Marks of Racelab for winning Urban Dare Tempe in a time of 1:52:35. Ethan Myer and Debbie Goodwin came in second, finishing there final dare 45 seconds later.

The third through fifth place teams were tightly bunched with There's no I in Beer finishing ahead of Hometown Hotties and the Desert Wahinis.

All in all it was a great day, and I thank everyone who participated. 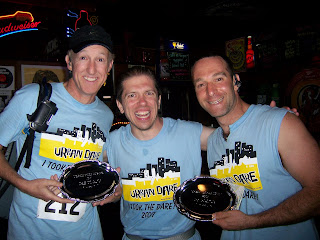 This Urban Dare Champions race will be held on January 12 in Miami Beach's South Beach section.

I will try to get us a good rate on hotel rooms when I will be in the area setting up our race in the Coconut Grove area on Dec 8. In the meantime you can start looking for deals on flights.

All other teams will pay the standard $90 dollar fee to participate and can register online.

It's been a great year so far, and I believe we are fastest growing race series in the US. I expect to continue this growth and to continue to make improvements for some time to come.

See you in South Beach, if you dare!
Posted by Kevino at 4:41 PM 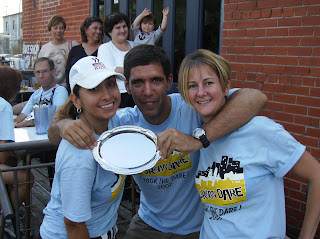 Here was the stumper clue of what turned out to be a fascinating race:

"This museum was once a Lone Star Brewery. Get your picture with the Shrouded Entry in front of it."

Pictured here is Joe Koizen with the Roxanne Flores & Connie Basel of the Get Out Girls. I chose this picture, because of the little girl in the background. The Get Out Girls are the Urban Dare San Antonio Champions and Joe is a strong champion for San Antonio.

Joe, along with Jen Miller and her husband Drew, did the March race in Austin. We were hanging out after the race and they talked me into doing a San Antonio race. Not only did they help put together and work the race, but Jen and Drew also put me up at their house. Many thanks:)

A week before the race, I received an email from Megan Rutledge asking if she and her husband could bring along their 10 year old son Garrett. She said they didn't care about winning, they'd just have more fun with Garrett along. Imagine my surprise when they were the first team to show up and completed their dare before any other team arrived. We all got very excited about them maybe taking first place and started reviewing their pics. Alas, the stumper got them and they had to ultimately settle for 10th place.

Suzanna & Pete Swanson of the Posers and Bradley & Brian Book of the Banned Books were the second and third teams in at the finish, but they, too, got stumped. The Banned Books decided they were going to back for the Shrouded Entry.

The Get Out Girls, our champions, were the tenth team to succesfully complete all checkpoints in a time of 2:57:53. Close on their heels were Kylie Clayborne & Kristen King of Red River Runners and next were Estelle Mack and Pia Puno of Macapuno.

The desire award goes to the Banned Books who returned one hour and twenty-one minutes after completing their final dare. They came back with the Shrouded Entry shot and were the 9th and last team to successfully complete all checkpoints.

I tell people that Urban Dare is the race where smarts can beat speed. That's exactly what happened in Urban Dare San Antonio.

Here are the top five:

Texas is starting to get to me. In a good way, of course. We will have a Texas series next year, and already have three races scheduled. I'll probably add a Houston area race. In the March 29 Urban Dare Austin, we are hoping to open the race by setting a World Record.

The schedule is Mar 29 Austin, May 3 Dallas, TBA San Antonio.

The San Antonio Museum of Art's building is in the National Historic Register as a former Lone Star Brewery. There is but one statue smack dab in front of this building. It is titled "Shrouded Entry." Almost everyone passed by close enough to touch it.
Posted by Kevino at 6:53 AM 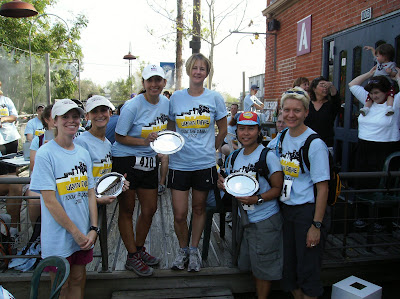 Hooray to the top three teams in today's Urban Dare San Antonio pictured here. I love that they are all women - smart and fit women.

Thank you to everyone who participated in Urban Dare San Antonio. After a great first race, I'm ready to make this an annual event.

I'll do a more detailed report tomorrow. It was a fascinating race at the finish line.
Posted by Kevino at 7:43 PM