Check out this video from Urban Dare Chicago. Thank you to Julie Miyamasu who sent me this video put together by her roommate Laura Busse. 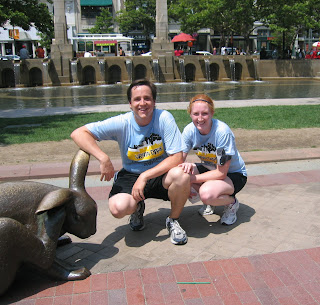 Congratulations to Mark Mixer and Alison Shawver of EGVB, pictured above, for winning Urban Dare Boston.

Jordan Harrison, half of last year’s winning team, finished second. Amy Kloempken & Julie Rising of Windy City Rejects were the third team to arrive at the final checkpoint, but the Constitution photo kept them out of the top 5.

The constitution was ratified by the Massachusetts delegation at the church of Reverend Jeremy Belknap, now the site of Bank of America. To celebrate the work of the state ratifying convention, Boston changed the name of the street where Belknap's church stood from Long Lane to Federal Street. The delegation discussed the Constitution at the Old State House, but did not ratify it until they met at Belknap’s church.
Posted by Kevino at 11:35 AM 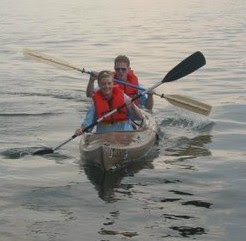 Urban Dare Boston will begin at Noon this Saturday, July 14 at Boston Common near the Visitor Center.

To get a feel for what is in store for you, here are a couple of articles written before and after the last Boston race:

We will be taking registrations up until the start of the race. Come join us on Saturday.
Posted by Kevino at 11:44 AM