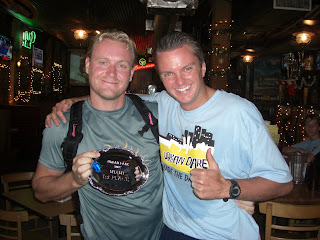 I’m finally sitting on my own couch after finishing the last race of the 2007 regular season. It’s good to visit home again.

We had another fascinating finish as the first three teams to come into the finish all had to go back out to gain the last stamp on their passports. They ended up finishing 1, 2, and 4.

The Swedish Vikings finished the dare at the finish in 1:49:18, but they just got a picture at Flanigans, not noticing that they were supposed to do their eating dare. Off they went to eat their chicken strips.

While they were out, Tracy Towle & Jeff Humphrey came into the finish at 2:05:09, but one of their pictures was wrong. They took a picture in front of Plymouth Church, when they were supposed to take a picture of Plymouth Manse. They asked me what a manse was. I told them I couldn’t say, but they better hurry up and get their picture with it. Out they went.

5 minutes later, Christian Skoglund & Gustaf Arnoldsslon of the Swedish Vikings came back with the stamp for the eating dare, and they got a picture of a bull statue on the way back for a 5:00 bonus. Victory was theirs with Jefftray coming back 10 minutes later to finish second. PuN was the 6th team in at the finish, but they finished in third place. They were the first team come in with everything correct the first time. Their position is they were the real winners. Hopefully they will show their stuff again in South Beach.

Shelley Schenker and her son Jonathan came in at the finish along with her husband Harold and their other son Elliott were the 4th and fifth teams in at the finish, but they missed one of the checkpoints. Harold & Elliott went and got their required picture in time to finish 5th. Shelley & Jonathan were content to call it a day. It was an impressive showing as the two boys were by far the youngest contestants.

Thank you to everyone who made the first Urban Dare Miami a success. Next month we move all the way over to South Beach for our Champions race on January 12. The winners will win $1,000. We will kick up the dares a notch for this race. Take the dare!

Here are the top five finishers. 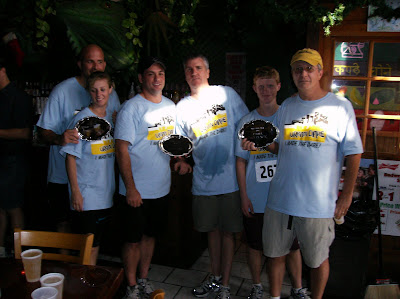 Congratulations to Pat Trimpert & Jeff Roy of South Tampa Mafia for winning Urban Dare Tampa in a time of 1:41:22. Second place went to Ginger & Jason Couden of the A Holes. The father and son team of Tom & Max Levin came in 3rd.

Thank you to everyone who made Urban Dare Tampa a big success.