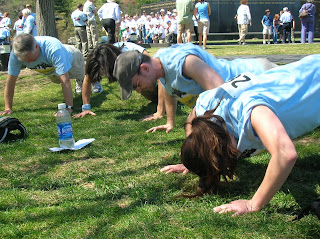 We're still trying to figure out what's going on with a Champions Race for the 2007 series. The race will probably occur on Saturday, January 12, 2008, and be somewhere warm.

Last year, it was held in an undisclosed location. We paid the airfare and hotels of all the 2006 Urban Dare series winners, told them they would travel on December 8 and December 10. At midnight the night before they travelled, we called them with their itineraries and told them they were going to Orlando.

This year will be different. We simply can't afford to pay for everyone's travel. Hopefully, that will change in the future as we are currently in talks with several potential sponsors. That said, we will see what we can do for the 2008 winners and top finishers. Certainly, free entry is a given.

We expect that we will probably hold the Champions Race in a disclosed (not yet) location and that it will be open to anyone that wants to register. All 2007 winners and some top finishers will have free entry. 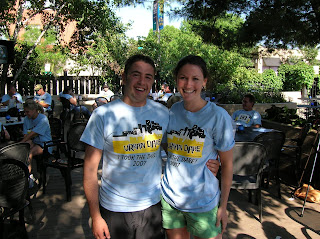 Congratulations to Lily Berman & Isaak Lerner for winning Urban Dare Chicago in a time of 4:14:55. Pictured here, they were the 38th team to arrive at the finish, but were the first to successfully complete all checkpoints.

“Get your picture with the plaque commemorating the first session of the Board of Trade of Chicago.”

Patrick Doran & Jason Majorczak of the Jayhawks deserve recognition as the first team to finish with an impressive time of 2:21:41. They had the same photo as almost all teams of a plaque outside the Board of Trade, so they got an*BT by their time. For almost 2 hours no other team successfully completed all checkpoints, so it looked like they might win after all. I thank them for their good sportsmanship and congratulate them on a well-run race.

I was excited when Don & Rob Maldonado, the sixth team to show up at the finish, started showing me their pictures and they got the Board of Trade correctly. Don came up to me about 5 minutes before the race and told me his team didn’t have a camera, and I had lent him mine. Could the winning pictures actually be on my camera? Alas, they missed one other photo and ended up with an asterisk by their time.

I’ve decided to post the top 11 teams, instead of the top 5, because it gives a more accurate picture of the race. The top 5 teams are the teams that got everything correct. The next six are the first 6 teams to complete the last dare and show their pictures for validation.

I bill Urban Dare as the race where smarts can beat speed, and, on Saturday, speed was not the biggest factor. I credit shear doggedness, as most teams that successfully completed the course backtracked and spent considerable time getting the Board of Trade shot.

Oh yes, let's not forget the plaque. One of the internet reseachers told me he saw an obscure reference to it as one of many commemmorative plaques along Wacker, but without saying where along Wacker. You'll find it near State in almost a straight line between checkpoint 1 and checkpoint 3.
Posted by Kevino at 7:25 AM