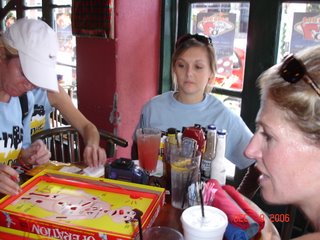 Give the gift of adventure this year.

Urban Dare entries are on sale for just $80 per team of 2 between now and January 20.

Urban Dare, http://www.urbandare.com/, has ten races scheduled for its 2007 national series, and we will add more cities.

Urban Dare is the race where smarts can beat speed. Teams of 2 solve clues to find checkpoints where they must take photos or perform dares.

Once you are out of the starting blocks, you will pick up your clue sheets and be on your way. You can call friends as much as you want for help on clues. On checkpoints that mention a photo, you must get a photo with both team members to show you were both there. At checkpoints with dares, you must accomplish a task and get your passport stamped to move on to the next checkpoint. Dares range from throwing a bulls-eye, doing a climbing wall, completing a puzzle or eating something (things people like, not bugs).

Join in on the fun and be a part of one of the fastest growing races in the country.

Check out Urban Dare at www.urbandare.com. 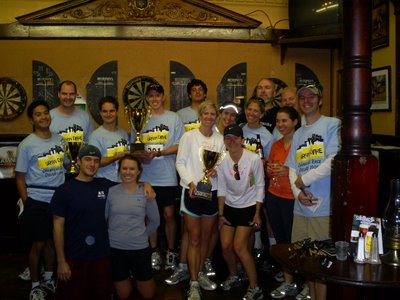 Congratulations to Erik Carpenter and Tyrone Summers of the Jolly Rogers for winning the first ever Urban Dare National Championship. These guys were simply amazing, finishing a full 40 minutes ahead of the second place team. Wow!

The consensus favorite for the toughest dare really surprised me. Racers had to power their two-person swan boats around the fountain in Lake Eola by peddling. The boats handled poorly and the peddling was described as agony. And here I thought it would be a whimsical diversion in the middle of the race. Go figure.

Second through fifth place honors all went to California teams, led by second place finishers Paul Kim and Chris Campin of the San Diego Urban Dare Super Stars. Kim hobbled into the last checkpoint with a cramped leg, but hung in strong as they had to complete a jigsaw puzzle and throw a bulls-eye to finish the race.

Third and fourth place looked like an instant replay of the Urban Dare San Francisco finish. Valerie Herzog and Jenn Gammon of team Speedy arrived at the same time as Christine Simpson and Lisa Clarke. Speedy finished their puzzle quicker and walked away with the third place trophy. It’s too bad we couldn’t give the trophy to both teams. These four close friends seem to operate as one unit.

I’d like to thank all nine teams who participated in this year’s Champions Race. You were the best Urban Darers in the country this year. It was fun to provide you with another day of challenges. And unlike the BCS, we have an undisputed champion.

Unfortunately, the Urban Dare Boston Champions were unable to make it to the Champions Race. Professional success sometimes means we can’t get away for a fun-filled weekend. To Greydon Foil and Jordan Harrison – you were missed. See you next year in Boston.

Here is the order of finish for the 2006 Urban Dare Champions Race:

Next year’s schedule will repeat all of the 2006 cities and we will expand into at least another five races. We have already added Austin and New Orleans to the schedule. Want to give someone a great adventure for Christmas? Sign them up for Urban Dare today.

Thank you to everyone who helped make this a very successful year for Urban Dare. I look forward to seeing you at the races next year. In the meantime, the Champions Cup resides in DC.
Posted by Kevino at 6:56 PM 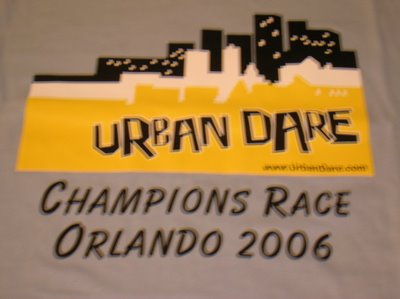 The Urban Dare Champions Race will take place in Orlando on Saturday, December 9. The race will begin and end in Winter Park, and will run through downtown Orlando.

It looks like we will be having a cold spell with a high of 67 forecast for Saturday.

Here is the clue for the start, which is a short walk from the hotel:

Start – This daring general brought elephants over the Alps and wreaked havoc upon Roman armies. Go to his square for the 11am start.

I look forward to a good competitive race.
Posted by Kevino at 8:57 AM 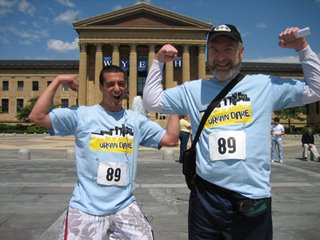 Tomorrow I depart for an undisclosed location to finish preparations for the Dec 9 Champions Race.

Current forecasts call for highs in the mid-70’s for race day. Beyond this, you will receive no clues as to the whereabouts of the championship city.

Here is some information to help you plan for next weekend.

The race will stick to the Urban Dare format, in which you have all excelled.

The race will start at 11am Saturday, December 9.

Ten teams, la crème de la crème, will be participating for the national championship. The field consists of the nine winners of Urban Dare's regular season and the second place team from San Francisco.

Thursday night at midnight Eastern Time we will notify everyone of their flight and hotel itineraries. We will call, send emails, and post info on the Urban Dare site.

Flights for all participants to the Champions Race are on Friday and return travel is Sunday.

I have not arranged for your transport from airport to hotel. I figure you will probably want to rent a car to explore the city before the race starts.

I wish all of you the best of luck and look forward to seeing all of you in…
Posted by Kevino at 11:53 AM