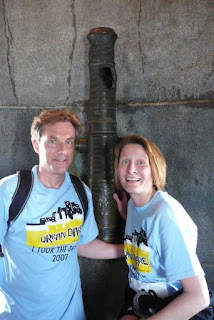 After miserable weather forecasts, we had a mostly sunny day with no rains until about 4:30 when most racers were safely ensconced in the Sweetwater Cafe. Kudos and thank you to all who participated and congratulations to all finishers.

Pictured are Lydia Gregoret & Charles Wilson at the top of Bunker Hill Monument.

Race-day registrants Sean Jack & Chris Ancers signed up as Awesome, Inc. They lived up to their billing with a winning time of 1:55:12. They were the only team under 2 hours.

Donald Hess & Dave Young finished comfortably in second place in 2:12:26. The race for third place was where the real action was, as we had three teams all at the finish doing their puzzle dare at the same time. Ken DoRosario, a veteran UD Bostoner, and his sister Marguerite Reynolds finished ahead of Sig Fin Fen and the Brighton Bombers.

This clue was nicknamed the "I hate the race director" checkpoint:

"Go to Breed’s Hill for your upwardly mobile photo hunt. Oh yes, you must go all the way to the top of what sits atop this hill. Get your picture with the damaged cannon at the top."

For those of you not in the know, Bunker Hill Monument is what sits atop Breed's Hill. I climbed those 292 steps on Thursday and my calves were still sore from it on race day. You wanted a good challenge, right?

Speaking of not in the know, take a look at what's wrong with this clue:

"Honest Abe freed the slaves with his Gettysburg Address. Get your picture in front of the statue honoring this act."

Only one racer busted me on this clue. It was the Emancipation Proclamation that ended slavery. Luckily, everybody knew what I meant.

A special thanks to my nephews Joe & Tom, Ashley, Alejandra, and Chris for a superb job of running the checkpoints. 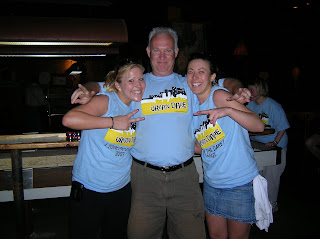 Thank you to everyone who made Urban Dare DC 2007 a great success. It was our biggest race ever.

Congratulations to the Jolly Rogers, 2006 National Champions and 2006 DC Champions, for winning the 2007 Urban Dare DC in impressive fashion. Interestingly enough, they were the first team at only one checkpoint. Yes, you guessed it, the final one. Good navigation skills and figuring out what order to visit checkpoints makes a difference. Of course, Ty and Erik do a pretty good job running from point A to point B.

And major kudos to Jane Argentsinger and Emily Appleman for taking second place. I confess that one of the best parts of directing Urban Dare races is meeting beautiful, strong, fit, intelligent women. Sorry, Jolly Rogers, I'm going with the picture of myself with the top female team in the race. I know it's selfish and this shouldn't be about me, but I can't resist.

Francoise Galleto wrote a great report of her race experience on her blog at http://dc365.blogspot.com/2007/04/thing-27-urban-dare-dc.html. Thank you, Francoise.

One of the favorite dares of the whole race, was the Ode to Our Soldiers Dare. This was a suggested dare, that was sent to us. Keep the good ideas for dares coming. I'd tell you what the dare is, but you may face it in your next Urban Dare.

And we had one problematic dare - the American Meridian, where you had to stand with one foot in the Eastern Hemisphere and one foot in the Western Hemisphere. It turns out there is more than one historic meridian in town. I did not accept the photo given me by Trabue & Jennifer Bland, but it turns out they were right. I am reinstating their time, which makes them fourth place. I'm not bumping anyone, so the DC post will have a top 6.

Here are the top 6 finishers of Urban Dare DC:

And a big thank you to DailyCandy.com. I received 40 registrations and over 150 email sign ups in the last 24 hours before the race. Most of these were prompted from an email they sent out on Friday. I love DailyCandy.com.
Posted by Kevino at 12:59 PM 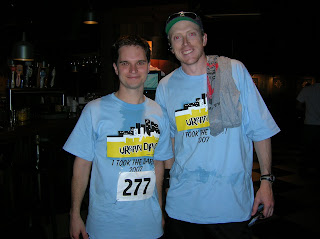 Urban Dare DC will start on Saturday, April 21 at Noon at Pershing Square, just across from the Willard Hotel at 14th & E Sts NW. This is the same place we started last year. We will begin check in at 11:15 and there will be a short race briefing at 11:55. Come early if you have not yet registered.

Urban Dare is the race where smarts can beat speed. Teams of 2 solve clues to find checkpoints where they must perform dares.

Check out Urban Dare at www.urbandare.com.

Coming to the Alamo - Nov 3 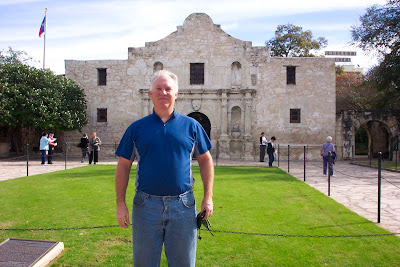 Urban Dare Austin was so much fun that we're coming back to Texas this year.

Urban Dare San Antonio has been scheduled for Saturday, November 3. The race will begin downtown near where Peewee went to look for his bicycle.

Here I am pictured in front of the Alamo on my only trip ever to San Antonio. I was in the middle of riding my bicycle from San Diego to Key West a couple years ago. 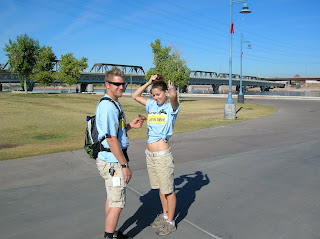 On Saturday, April 21 we will be running Urban Dare DC. This is the first of four straight weekends of Urban Dare races.

Urban Dare Boston is April 28, Urban Dare Philadelphia is May 5, and Urban Dare NY is May 12.

I'll be zipping up and down the East Coast for the next 7 weeks getting ready for these races. I expect each of these races to be bigger than they were last year. We must be doing something right.