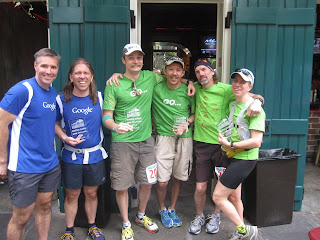 The Beard's won the obstacle discipline to get the early jump on the field, but several teams were hot on their heels.

Then Laura Kiekhoefer & Cory Haala, the brains of the group, kicked butt in the trivia quiz. They missed 17 out of 65 questions to earn their two minute bonus. Colin Cushing & David Horgan were second in trivia with 30 missed to finish with no time for this discipline, 3rd place got 30 seconds, and 30 seconds more for each subsequent team.The Beard's still enjoyed a slim lead with the top 10 teams within 10 minutes going into today.

Thank you to everyone who participated in making this a fun event.

I'll issue official times tomorrow. Now my work is done, and I have one night left in New Orleans.