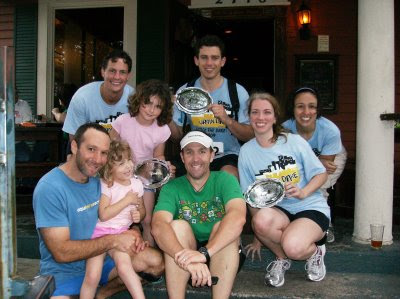 Thank you to everyone who participated in Urban Dare Dallas.

Congratulations to Jason Mittman & Robert Butler of Vignette JR for winning in a very fast time of 1:26:10. Jason came in second in Urban Dare Austin and was determined to win entry into Super Dare. He will be with us on our 3-day Royal Caribbean Cruise next February. His nieces joined us to liven up our picture.

Rather than do a race report, I'll refer you to a couple blogs I saw of some racers' Urban Dare Dallas experiences. Here is a report by Rudy Cassol:

and one by Jonathan Wallace of AmeriCorps Alums Dallas:

We will be scheduling a Fort Worth race for sometime in the Fall.

Here are the top five finishers of Urban Dare Dallas: